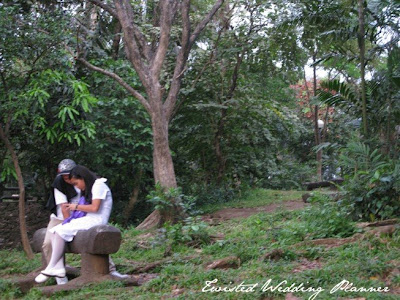 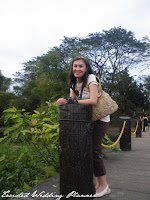 Last weekend I was surprised by my Sweetie. He brought me to the Ninoy Aquino Parks and Wildlife. It was a pleasant surprise since it was relaxing to walk around greenery instead of walking around a concrete jungle (err a mall).
We saw quite a number of lovers chatting under trees and having a picnic (yes a picnic in the city!). We also saw a barkada catching the rays of the sun doing what looked like a pre-nup pictorial for a couple (they're at the far right in my photo).
I know a lot of couples go out of town to have their pictorial. The Ninoy Aquino Parks and Wildlife is definitely a great place to have your pictorial and you won't need to go out of town either!
Location: Quezon City
Entrance Price: PhP15/car; PhP8 per person
Check out more photos in my travel blog.
Ipinaskil ni Aileen Apolo-de Jesus sa 5:39 AM No comments:

Kasal.com has a special treat for married couples or engaged couples marrying this 2009. Get a chance to win an overnight stay at the Tagaytay Country Hotel! All you need to do is blog about your Valentine day.
Complete mechanics may be found here.
Ipinaskil ni Aileen Apolo-de Jesus sa 3:49 PM No comments:

And They Lived Happily Ever After...

A year ago I witnessed a very public proposal during MYMP's Valentine concert and I blogged about it in detail on An Apple a Day. I always wondered who the love birds were and eventually Sweetie found them on Multiply, Gian and Resa.
A few months later we attended MYMP's album launch and asked Juris if she had any idea whether the couple tied the knot already. I'm sure she was quite surprised about our question, but was pleased that we watched their Valentine concert. Sweetie and I always wondered whether they did tie the knot.
And the mystery was solved when my blogger-friend from Singapore, Alex, told me that Gian and Resa were his friends and have tied the knot recently!  Here's some proof via their wedding announcement page - 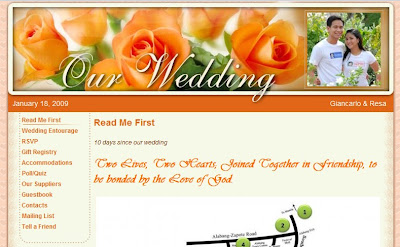 That's one among the many other proposals I've blogged about last year! Best wishes to Gian and Resa!
Ipinaskil ni Aileen Apolo-de Jesus sa 6:12 PM No comments:

Cones for the Petal (or Rice) Shower

Florists usually just give wedding coordinators/planners a bag filled with rose petals and it's up to the coordinator to distribute it. So how do you exactly do this in church with all the other things you need to do?
I snagged this nifty idea from a recent wedding I attended. 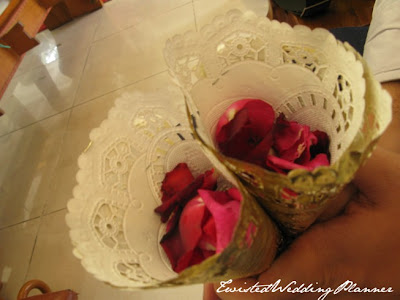 Make flower cones! All you need is a half-sheet of paper (or nice metallic paper like the one in the photo), roll it up to shape like an ice cream cone. And there you have it, an easy-to-pass around flower cone!
Ipinaskil ni Aileen Apolo-de Jesus sa 8:23 PM No comments: