Meeting The One Online

You know the deal with long flights. You either get a great seatmate who's a great conversationalist or you get someone who just keeps to himself and looks at you suspiciously once in a while.


A few months ago I found myself boarding a plane to the US. I prayed to God to give me a seatmate who'd be friendly. Lo and behold! I was seated beside an American. He's name is Michael and was on his way home to Texas. He was not only friendly, but we managed to talk about a lot of stuff - everyone was already asleep and we were still talking!


Anyway, Michael was visiting a friend in Cagayan de Oro and he mentioned that he was looking for a wife! He said he wanted a Filipina since Pinays are not only beautiful, but caring too!


Nuninunino... fast forward to March... Michael buzzes me and tells me he's getting married! He asked me details on documentations needed and the local wedding customs. I then directed him to visit these sites:

I warned Michael about all the paperwork he needs to put up with and all the seminars he'll have to go through before the wedding. He was unfazed and I helped him book a hotel near the embassy for his trip here in Manila. 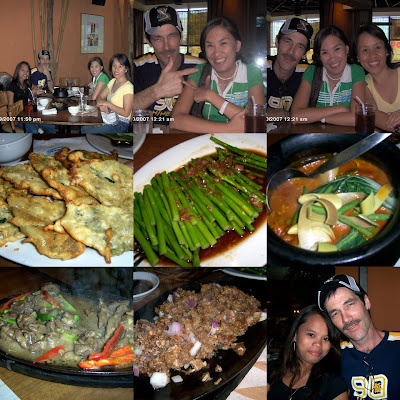 I had lunch with the lovebirds last week. It was my first time to meet Jovil, such a lovely young lady who had her Tita Janet as her chaperone. We had a sumptuous lunch at Gerry's Grill in Robinson's Ermita and good thing Michael was "game" at tasting all the Filipino food we ordered for him.

The lovebirds met online! A sure testimony that love may happen on or offline, a stone's throw away or ocean's apart. They were really sweet (check out the head-smooch photo I made them do).

The Michael-Jovil Nuptials will be on April 26, 2007 at Butuan City. Congratulations and best wishes! (Wish I could be there to attend!).