I just wanted to share this very beautiful wedding of my friend based in New York.

A wedding photographer would eat up about 15 to 20% of your budget and more if you get a renowned one. You definitely have to get the best photographer around and make sure the he delivers.

I have some friends who have been married for more than 2 years now and have not received their wedding album. They do have digital copies of their wedding photos, but despite frequent follow-ups with their wedding photographer they have not received their album. Because of this I asked the advise of my wedding photographer-friends and they said that my friends had the misfortune of hiring those suppliers and just have to be adamant about having their albums finally delivered. My wedding supplier friends also mentioned that you could actually hire a photographer for his services alone and just have your album printed by yourself. 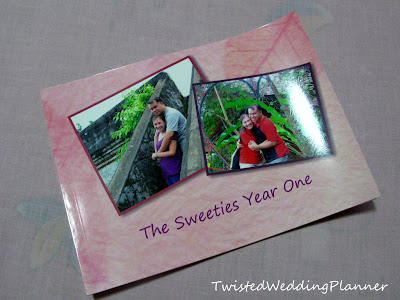 I did some research and found out that there are several suppliers you could work with to print your wedding album.

1. Picture Books - you can lay-out the album by yourself by downloading the software or work with them through any of their six braches. "Books" are available in small, medium, large or extra-large, softcover or hardcover. Prices range from PhP250 to PhP2,795.

2. Printed Matter - the options for album printing is a bit limited since they just designed it to be a "signature album", but still an option nonetheless.

Here's a book I had printed with Picture Books recently - 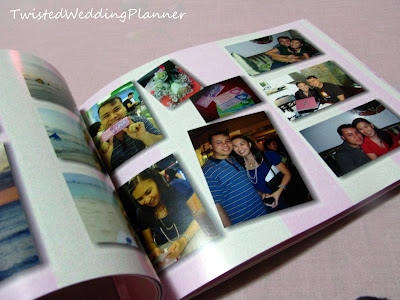 Engagement at the Top of the World

Jason Chuck, product marketing manager of Google, shared during the press launch of Google Mapmaker that he was in the Philippines for two reasons: (1) to get engaged; and (2) for the launch of the Google Mapmaker.

The Twisted Wedding Planner then grabbed the chance to ask Jason about the kilig side of his trip and he excitedly recounted how he planned the engagement. Jason said that he originally wanted to relive the first time he met his fiance - on the mountaintop during a snow boarding trip. He was set on doing that but unfortunately the season for snow boarding has ended.

There isn't that much map data yet in the Philippines, but Jason heard a lot about Palawan, so he decided to go to El Nido. The trip proved to be an exciting one and they both went on a sunset hike. Jason's girlfriend had no idea that he had set-up a romantic nook at the top.

"It wasn't so romantic you know since we were all sweaty and tired after the hike, and it rained a bit so the sunset I was hoping for wasn't there, but things went well," Jason shared.

It's so heartwarming to hear how guys go through all the trouble to prepare to get engaged. It is, after all, the start of a whole new chapter in one's love story.

Thanks Jason for sharing your story!