How to Choose Your Motif 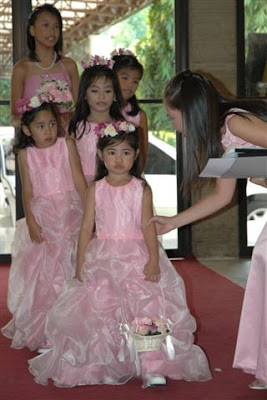 I’ve been part of the entourage for several of my friends, that’s why people keep kidding me that I am a professional abay. I have gowns in almost all colors! (That's me coaxing the flower girl to do her walk haha).

I never really thought about what would’ve been my motif for my wedding. I was too scared to even think about fixing it up (that’s why I’m a twisted wedding planner remember?). So how does one choose le motif? I don’t really know, but this is what my friends thought;

o It should be the bride’s favorite color (er… normally it is)
o It should be a significant color for the couple (cheesy!)
o It should be a unique color, something not normally used for a wedding (that is if you could find the right tela for it)
o The color should flatter your whole entourage (don’t use red if most of your entourage is morena)
o Choose a color that suits your age (when you’re 45, I don’t think baby pink suits your age and that goes for the gown too, no Cinderella ballgowns please)

After defining your motif and theme, it would then be easy to choose the tela and the bling-blings you will be using for the gowns and the giveaways and the flowers. You wouldn’t want to use gumamela as flowers for a really formal, traditional wedding do you? (well that’s an extreme example). It’s just like making a marketing campaign. Make sure you communicate only one message. If it’s Filipiniana, then stick to it, there wouldn’t be any place for American burgers in your reception. It could also be a mix of stuff, a fusion. But make sure it’s not a hodge-podge of things! Simple elegance goes a long way.
Ipinaskil ni Aileen Apolo-de Jesus sa 5:05 PM 1 comment:

I remember going through the pamamanhikan for my Tita Pet, Ate and Kuya, and the Brit-Pinoy wedding I did. Tita Pet married Uncle Fumio, a Japanese, back in the 80s and Uncle Fumio had to ask for her hand in marriage from my Dad since my Lola Iyay was a widow back then. I think I was only about 7 years old when I saw Uncle Fumio having a one-on-one with my Dad at our resort, Villa Merced, in Bicol. It was a very long adult discussion and I just remember that they made me play longer at the seashore so I won’t bug them.

My Ate’s pamamanhikan was a huge party we held at home. I was only about eleven at that time and just knew that the party was about getting the permission of my Dad for my Ate’s hand in marriage. What was different then was the fact that my sister and Kuya Johnny were in the US and they just called in during the party to fix up stuff (too bad the internet wasn’t commercial as it is now during that time). After that all the wedding arrangements were done offshore.

We had to travel to Pangasinan for my brother’s pamamanhikan. I was about 13 then and we rented a huge coaster to fit in my immediate family and about 20 more relatives. We had to put in a show of force since Ate Joy’s family was huge. All I could remember was the food!

Another experience I had recently was for a British-Filipino wedding I did. I was tasked to accompany the bride’s brother to pick up the groom’s parents at their hotel. It was their first time in the Philippines and I had to act as the tourist/culture guide. It was a short ride from the hotel to the bride’s home, and I realized they had no idea that they had to go through ‘pamamanhikan’. So I explained it to them and they got through with it without any hitches. I’m glad I brought it up since the bride appreciated the gesture they made in adjusting to Filipino customs.

So what exactly happens during pamamanhikan? I’m not really sure if people who get married nowadays go through this. I personally went through this a few years ago when my fiancé asked for my Dad’s permission to marry me. There wasn’t so much fanfare. It was just like any other day that he was at home. I asked my parents to sit-down at the dining table because my boyfriend wanted to speak with them.

Of course, my BF then was very nervous. My Dad’s very traditional and normally that scares guys away (not so much now though, he’s about to sell me already!). Anyway, my BF then just took a deep breath and said we were already planning to get married. I guess my Dad was expecting it already and he just said that it was about time and that they were very much willing to help in any way.

I’ve heard of some pamamanhikan horror stories. There are some where the in-laws end up bickering about the wedding arrangements, usually financial matters. I had a friend who even went through the stage where her mother-in-law said, “there’s still time, my son can find another woman to marry”. Ouch, but things ended well when they had a baby.

Inasmuch as my wedding didn’t push through, I think I would want to go through the same thing again. Traditional as it may seem, I think it’s a very important step that shouldn’t be missed before the wedding. It may not be that your fiancé is actually asking for your hand in marriage from your father, but the gesture says a lot. Respect for your family is highlighted in this event. And besides, marriage is not just all about the two of you, but all the “merger” of two families.

So what exactly is the pamamanhikan program?

Of course, notwithstanding that everything goes well, both families should try to spend more time together by helping each other out in the wedding arrangements. I know this may be difficult to fathom since it’s usually the bride and groom and their friends (or wedding planner) who does the arrangements, but wouldn’t it be great if you guys try to reach out to your families?

How to be a Professional Abay

“Marriage requires a person to prepare 4 types of "Rings": Engagement Ring, Wedding Ring, Suffering, Enduring”
- Fr. Leo Acierto, C.P. in one of his homilies
I've been privileged to see four of my friends tie the knot last year and they dragged me into the wedding preparations which I did (of course) because I love `em. And they now call me a professional abay and because of this I have acquired several gowns of different shapes and colors. Seems quite funny, but I always find pleasure in seeing my friends start forever by walking down the aisle (ay romantic!).
When I was a kid, my Mom, Ate and I thought of opening a wedding shop. My Mom taught us how to organize activities (events), do craft work (giveaways), negotiate with suppliers and the most important of all, people skills. Our dream didn’t push through since my Ate left for the US to take her MBA. That was in the 80s, and today I believe I’ve lived through that dream.
Planning a wedding is no easy feat. I’ve been through different types of weddings, from budget to bongga. Hired bands, the Manila Philharmonic Orchestra, wrestled with printers, photographers, exporters and designers. The brides would wake me up before my wake-up time, call when I’m about to sleep, SMS in the wee hours of the morning, discuss tela, beadwork, tiaras, seating arrangement, bridal cars, lay-out… get the picture? And I did it for free. But, all in all, everything was successful and so far all of them are still on honeymoon stage and my best friend is giving birth in May.
But what does it take to get married today? I don’t know! But, the best advice I’ve read and heard so far are the following:

For some insane reason my friends keep asking me about wedding requirements. So, how does one prepare to wed? Parishes/churches require the following from couples:

There are additional requirements for those marrying a foreigner, divorced or divorcee, widow or widower, and non-Catholic/non-Christians in case of mixed marriages.

Because of this wedding planning hobby of mine I always get asked, “So kelan ka?” And I just always roll my eyes and say, “Madaliin ba ako? God hasn’t Willed it yet.” Some of my friends would say, “She has to be tied up to a chair and forced to do the deed.” Yeah, yeah, but seriously, I think getting married is serious business (and a daunting task) and something that would just come when it is the right time. For the meantime, I believe all singletons out there should be make the most of their time by being of service. Aside from being able to help others, you’ll gain new friends and manage to keep away from food binges since you’re busy. (And one tip: just disappear from the hall when it’s time for the garter toss and bouquet throwing haha).

*Abay - part of the wedding entourage