If there is one thing that will surely make a guy sweat - it's THE PROPOSAL. Some guy friends also brought me with them to buy THE RING. And, my oh my, they were anxious the whole time.

So is there any formula for the perfect proposal? Nah, I don't think so. I think the secret is just to ask from the heart and being sincere. So, if you have doubts, then don't even think about asking! 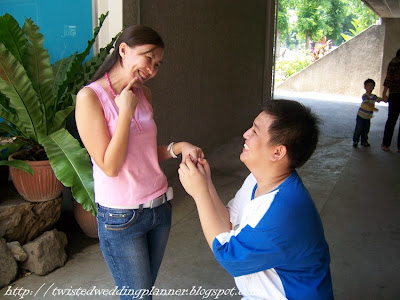 Here are some really kilig and sweet proposals I've been told:

1. Will you marry me? - this couple traveled to several countries in Europe and in their second stop at the Eiffel Tower the guy just got down to his knees, whipped out the ring and asked the girl to marry him. And then he brought out two shirts, one with "Will you marry me?" and the other had "Yes" printed on it - the words were written in all the languages of the countries that they went to. Preparation is key.

2. Before flying off - the guy brought the girl to the airport. She was leaving for the US, little did she know that the guy was able to get an airport pass and he surprised her inside with flowers and the ring. I am sure her altitude would've gone up even before the plane took off.

3. Style Mo Bulok - okay, I take that back coz it's how my Dad asked my Mom to marry him... My Mom said that after passing the bar exams my Dad told her, "I'm going to get married already." My Mom said, "Okay, so get married." Dad replied, "I'm going to marry you." Plain and simple. They've been married almost 50 years now. Now you should hear about how my Dad made her his girlfriend, but that's another story.