One of my friends dumped on me 4 thick albums days before her wedding and said, "Hope you can do our pre-nup video! Here's your dress, we gotta go now. See ya at the hotel before the wedding."

I was faced with a huge problem then - I HAD NO VIDEO EDITING SKILLS back then. I had mastered powerpoint by then, so I ended up scanning multitudes of photos and did a timed video. I have since done a couple of pre-nup "videos" for other friends and it usually goes by this formula:

When the prince met and pursued the princess...
Photos showing how the couple met
The courtship

The prince and princess together
The relationship
The engagement

And then the story ends at the point where the couple's pre-nup photos are showcased. A simple, but effective formula. I always choose the funniest photos and I try to relay the couple's love story through pictures. Doing it on powerpoint is kinda limiting and that's why I started to vlog (to learn how to edit videos).

While walking through hoards of suppliers in various wedding expos, I have found it really hard to distinguish the uniqueness of each supplier - especially for videos and photos. I usually end up hiding behind Sweetie while going through throngs booths. I get dizzy with all the flyers being handed out and I admit I have 2 bagfuls that I have not managed to sort.

I was reading through some twits through my Twitter account when I saw Buddy twit about some of the videos he has done recently. I met Buddy two years ago when he was just starting out. He was the one who captured me on video in the very first workshop I gave for PTTC. I eventually saw him again in an IT club meeting.

Anyway, I was kinda in an exploratory mode so I checked out his videos in his Youtube channel and I was very pleased with what I saw. I went through a couple of the pre-nup videos and realized what makes Buddy stand out from all others.

He has passion for his craft.

I have seen a lot of pre-nup videos done by studios and they all do not have heart. They just basically plug in everything in a video, timed with a love song and that's just about it. It's always just a canned, boring thing that makes you squirm in your seat while watching it.

Buddy's videos is like having your friend do it.

These I think are two very important elements when doing your pre-nup video. I wonder if Buddy will give me a huge discount when my time comes. Hehehe. (Just seriously kidding!).

Here's one of Buddy's heartwarming videos - 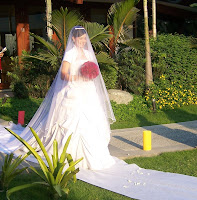 A year ago I had to help my son do his Christian Living homework. We had to find out how a Baptist wedding is done. Were the rituals the same? The traditions? Was it very different from Christian/Catholic weddings? I totally had no idea, but thanks to Mr. Google we found the answer.

It was only a few weeks ago that I finally had the privilege of attending a Baptist wedding. My former colleague and workstation-seatmate, Jonas, tied the knot at the Blue Leaf in McKinley Hill last March 31, 2008. I was quite excited to attend since Jonas told me about Tara even before he met her. Ahhh, it is such a beautiful love story. Jonas and Tara are a perfect blend.

Here's the program of a Baptist wedding:

Prelude: entrance of officiating minister to bride's parents
Serenade to the Bride
Unrolling of white carpet: entrance of flower girl and then the bride
Celebration of Marriage: giving away of the bride and scripture reading
The ministry of the Word/Wedding Message
Exhortation: Wedding Hymn, Exchange of Vows and Rings, Lighting of Unity Candle, Signing of Wedding Contract
Tribute to Parents
Affirmation of Marriage Bond
Sending Forth: Benediction, the Kiss, Formal Presentation of the Couple 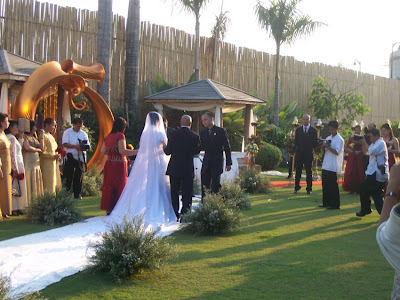 The ceremony was very solemn and each step highlighted a significant aspect of marriage. It was also obvious that most of the guests were from their community - which shows that one's marriage is supported as well by the whole community.

To Jonas and Tara, best wishes! And good luck in your new life in a far but near country. Yahooooooo!
Ipinaskil ni Aileen Apolo-de Jesus sa 10:31 PM 3 comments: